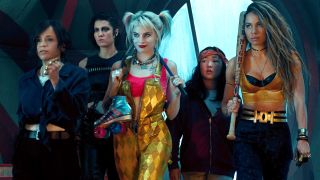 Harley Quinn is nothing short of iconic. Between the red-sleeved baseball tee, bright pigtails, and signature wooden bat, her image resonated in the DC’s Suicide Squad. So much so that DC has decided to make a Harley Quinn solo film.

The upcoming spin off is called "Birds of Prey: And the Fantabulous Emancipation of One Harley Quinn" and stars Margot Robbie. She will reprise her role as the sharp-tongued, fun-hungry villain we love to hate.

We don’t have to wait long to see Harley back in action — Birds of Prey hits theaters February 7, 2020. Here’s everything else we know so far about her starring role. Plus a look at the latest trailer.

There are two Birds of Prey trailers out now as we're just a few weeks away from it hitting theaters.

Who’s in the Birds of Prey cast?

Comedian Ali Wong is listed on the film’s IMDb page in an untitled role.