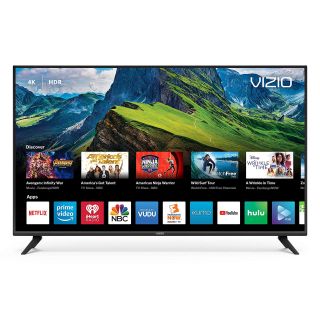 Vizio's most affordable TV just got even cheaper with a Black Friday TV deal that's hard to ignore.

Heading into the holidays, Walmart is dropping the price of the Vizio D50x-G9 50-inch 4K TV down to $248, saving you $151 off of the original $399 price. It even comes with free 2-day delivery. If you want a killer deal on a decent TV without waiting for the holiday weekend or Cyber Monday deals to kick in, this is a great opportunity to score some savings.

The Vizio D50x-G9 is a holdover from Vizio's 2018 lineup, and offers a solid (if basic) 4K smart TV experience for the most affordable price Vizio offers. This 50-inch model is the predecessor to the Vizio V-Series V505-G9, which is one of our favorite cheap 4K TVs this year.

The Vizio D50X-G9 is a 50-inch 4K smart TV that boasts a decent range of features for its budget-friendly price. The set has full-array backlighting, with support for several HDR formats (HDR10, HLG and Dolby Vision) as well as compatibility with Amazon Alexa and Google Home smart speakers.

However, there are a few limitations, like a 30Hz refresh rate, a basic port selection that's limited to three HDMI inputs, and quiet 20-watt 2-channel speakers. And without local dimming, HDR performance may be a little lackluster, even with DolbyVision support.

But you'll still get Vizio's SMartCast smart TV platform, which has a handful of locally installed apps like Netflix, Hulu, Amazon Prime Video and YouTube TV, along with free streaming services, like YouTube, Crackle, Xumo and Pluto TV. It also has built-in Google Chromecast support. The combination of local apps and the wealth of streaming content and apps on your phone make the Vizio a surprisingly versatile smart TV, and an especially enticing option for cord cutters who want to embrace streaming media instead of a cable bill.

The Vizio D50x-G9 is a solid budget-friendly set when offered for its usual price. Seeing that price slashed to $248 makes an already great bargain TV an even better deal, so jump on it before these are gone.