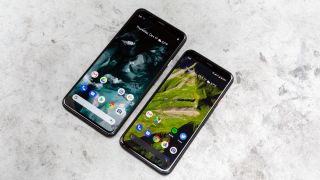 Black Friday isn't for another week, but AT&T has already unleashed a Black Friday deal for anyone who wants a new phone but would prefer to pay as little as possible. To that end, AT&T is offering four phones free of charge when you commit to the carrier for the next 30 months.

Phones included in this offer are the iPhone XR, Samsung Galaxy S10e, Pixel 4 and LG G8X ThinQ. To get the phones for free, you got to open up a new line of data on a qualifying unlimited plan.

Get a free Pixel 4 @ AT&T
You'll get $840 in credits spread out over 30 months when you select Google's latest phone, which is highlighted by dual rear cameras, a screen with a 90-Hz refresh rate and software powered by Google's AI expertise.View Deal

The phones are free in the sense that you get credits for them spread out over 30 months. Drop your AT&T service before then, and you're on the hook for the unpaid balance.

Get a free iPhone XR @ AT&T
The iPhone XR isn't Apple's latest phone, but its A12 Bionic processor still performs well, and there's a rainbow of color choices. You can get it free (via bill credits) at AT&T by committing to 30 months of service.View Deal

Of the phones on offer for free, the Pixel 4 is the most appealing of the bunch, having just come out in October. Google's latest phone has dual rear cameras, improved photo software, a screen with a 90-Hz refresh rate and cool software features like a voice-recorder app capable of real-time transcriptions.

Get a free Galaxy S10e @ AT&T
Samsung's entry-level Galaxy S10 has two rear camera lenses and a fingerprint display on the side, but otherwise, this phone is just as powerful as the full-sized S10. AT&T gives you $750 in bill credits over 30 months to enjoy the phone for free.View Deal

The Galaxy S10e and iPhone XR are also solid handsets, though they're lower-cost Samsung and Apple models. The iPhone XR, in fact, came out in 2018, though its A12 Bionic processor is still pretty powerful. The LG G8X ThinQ is a decent enough phone, and AT&T says it will include the dual-screen option that makes LG's phone a much more compelling buy.